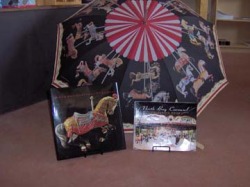 Due to the popularity of the first Carousel Book a second edition with more pages and pictures was released. This book can be purchased at the Giftshop @DiscoveryNorthBay, at the ticket van at the Heritage Railway & Carousel Co. or various merchants including Gulliver's Bookstore.

Heritage Carousel Colouring Book depicting sketches of all the Heritage Carousel horses as well as a legend by Edna Scott providing suggested colours and two different colour photographs by Ed Eng on the front and back covers. The colouring book is available at the same locations noted above.

Miniatures of Heritage Carousel horses can be purchased. The set of 4 represent the different styles of carousel horses.

The batch includes: Biscuit, Pearl, Dream Weaver and Sir Winsalot. Only four hundred copies of each horse will be produced in this first batch, and can be purchased at the Giftshop@DiscoveryNorthBay. If this fund-raising activity is successful other horses may be produced at a later date.

In answer to a continuing demand from carousel riders, local authors Martha Attema and Marla Hayes have written a picture book about the Heritage Carousel.

In the story Lily solves the mystery of Sir Winsalot’s disappearance to bring him back to the carousel. Local illustrator Skye has drawn that magic on every page of the book.

Martha Attema is a retired teacher and children’s author. She has had six (6) novels published for readers 5 to 16. She loves horses and strongly believes that carousel horses are magical.

Skye Hillard is an artist from North Bay, Ontario. Skye has been drawing as long as she can remember, but she has a passion for storytelling, which led her to become a professional illustrator.